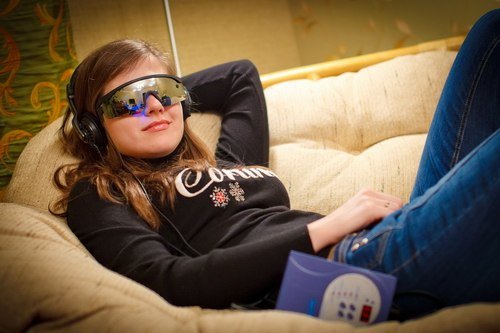 Through the visual apparatus a person receives more than 80% of all information about the external environment. Visual images are integrated into the nervous system through the visual bumps (which are located in the occipital lobe of the brain). Photons (the energy of light), reflecting from the object that we see, is transformed into a bioelectrochemical impulse. This impulse affects the pituitary gland, which controls certain functions of the body through hormones. These are the principles we use in therapeutic hypnosis, hypnotherapy.

At the same time, various emotions and feelings, such as hunger, sexual arousal, sleep, a feeling of joy, fear, anger, sadness, the work of biological rhythms and control by vegetatics can be regulated through sound, color and its brightness and frequency. For example, the lulling action of flickering light sources. It may create a different reaction, such as calming, sleeping, recovering from a strong stress factor or, for example, you can increase your concentration.

In addition, the pupils of the person narrow or widen, and the iris changes reflexively under the influence of a specially programmed flickering light. This increases blood circulation, improving capillary blood circulation in all tissues of the eyes. That in itself removes overexertion of the eyes, removing stagnant conditions.

But the main function of this device is the correction of various psychological disorders and psychosomatic disorders (used during a hypnotherapy session). Particularly well, some programs (such as EMDR) work with affective disorders, especially with depressive varieties of them. We often see an improvement in mood and getting rid of sleep disorders. Also, the positive effect of this device on Seasonal Emotional Disorders (autumn depression) is known. In our practice of therapeutic hypnosis, there have been significant improvements in migraines, fatigue relief and improvement in some eye diseases.

The software features of this device allow creating unique programs for neurophysiological reprogramming of subconscious processes (malicious installations and programs). That is, the hypnotherapist programs the device in accordance with the individual needs of the client. For example, if the client wants to change the bashfulness into courage, the therapist chooses that range and those templates of the stimulating colorgamme, which provoke more activity (but not aggressiveness) in the work of the nervous system. Together with a specific hypnoprotocol (suggestive program, administered by a hypnotherapist on time or right after an audio visualization session, creates a new neurophysiological imprinting program), there is a re-recording of those old programs that were installed in early childhood or adolescence and are limiting, prohibiting and destroying.

How is the session of hypnodiovisual brain stimulation going on?

You conveniently sit on the couch, put on your headphones and glasses, close your eyes. The hypnotherapist connects to your two fingers biofeedback sensors. You see the flickering light of the LEDs and hear the unique sound of isochronic tones. Some programs need to be looked at with opened eyes, some with closed ones. You also see a flickering light through closed eyelids. Gradually, some hallucinatory images are being created that immerse you deeper into a trance state. After 10 minutes of such experience, the hypnotherapist begins to speak. Two of the three modal systems are involved. Professional hypnologists call them VAK criteria from Visual, Audial and Kinesthetic.

In the progressive relaxation of the physics of the body is no more need. Therefore, the hypnotherapist can spend more time and efforts on the suggestion itself, that is, the creation of new subconscious programs. Isochronic tones and light special effects do their job: relax the body and reduce the frequency characteristics of brain waves to the borderline and below. But audiovisual stimulation and the voice of the hypnotherapist do not allow to fall asleep, leaving a small islet in the client’s subcortex (it is called the rapport zone), which reacts to stimulation. The rest of the subcortex falls asleep. Different combinations of sounds and light cause different alternative states of consciousness. Each alternative state of consciousness is responsible for its definitely-concrete effect. There is the diversity of programs.

We invite you to a session of hypnoaudiovisual stimulation in our “Center for Rehabilitation Hypnotherapy”.
More information about our treatment methods read here.